In Slazenger Heritage we pay tribute to our legends with our jumpers. We’ve talked about the greatest ones, like Jack Nicklaus, Tom Weiskopf, Tom Watson, Seve Ballesteros and even a movie star like Sean Connery. They all wore Slazenger jumpers, like Johnny Miller, the legend we talk about today.

Johnny Miller in the early years

In 1965, he joined the Brigham Young University in Provo, Utah, where he graduated in 1965 in physical education. During those years, Miller played several tournaments. One of them was the 1966 U.S. Open played at his home course, the Olympic Club. This helped him to finish in a tie for eighth place, being the best amateur and invited for the 1967 Masters. In 1968, he won the California State Amateur Championship.

Johnny Miller joined the PGA Tour in 1969 at the age of 22. During his career he won 25 PGA Tour tournaments. The first one was the Southern Open Invitational in 1971, and the last one was in 1994, the AT&T Pebble Beach National Pro-Am. Including those 25 tournaments, there are two majors.

The first one is the U.S. Open won in 1973, when he scored an amazing 63 in the last round. It’s the record for the lowest round to win a major, only tied by Henrik Stenson in 2016, at the Open Championship. 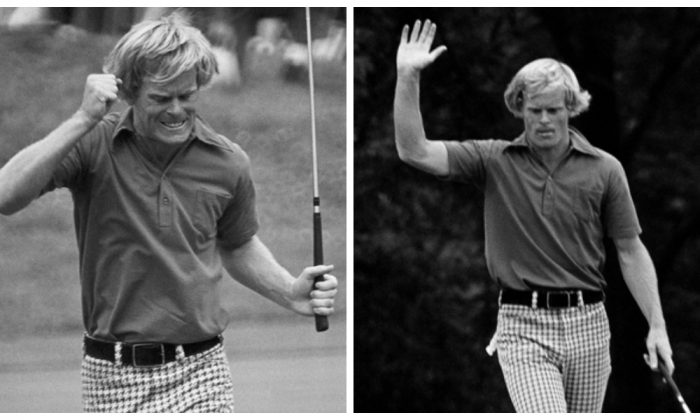 His second and last major came in 1976, at The Open Championship in Royal Birkdale Course. He won by six strokes, ahead of an 19 years old Seve Ballesteros and Jack Nicklaus. His 66 final round tied the record of the course. Johnny Miller  won The Open Championship wearing the Slazenger Jumper in Red.

Besides his 25 PGA Tour wins, Johnny Miller had 105 top-10 finishes. Also, he finished runner-up at the Masters three times, and the PGA Championship was the only major where he never could make it in the top-3. Member of the U.S. team in 1975 and 1981 Ryder Cups, he became a member of the World Golf Hall of Fame in 1998.