Last week, concretly on May 10th, Spanish tennis pioneer Manolo Santana he became an 80 years old tennis player. Or an 80 years old legend, in other words. Having ranked World. N1, he has been hailed numerous times as the father of spanish tennis. But, although nowadays he enjoys worlwide reputation, there was a time when Manolo Santana was just a simple poor boy working for rich people. Today we would like to make a journey through the history of this Slazenger legend.

A young and simple ball boy 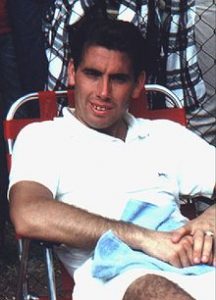 “I remember it as if it were yesterday, I see myself running around the club, trying to find a taxi for some member, and if they gave me a tip of five pesetas, I gave my mother four“. This quote defines his life as a child very well. At the age of ten, Manolo Santana began working as a baseball player at Club Velázquez, in those days a prestigious club in Madrid, Spain. Thanks to his cunning and enthusiasm, he captivated tennis coach José López, who allowed him to use his own racket in his free time. As Santana once said: “Angel Nieto, Severiano Ballesteros and I were the ones who somehow made our sport popular outside Spain“.

In 1961 and 1964 he won the Roland Garros tournament, his opponent, now friend, Nicola Pietrangeli. The following year, headed by Santana, Spain qualified for its first Davis Cup. However, in Sydney, he lost at the gates of victory competing against the unbeatable Australian tennis players. 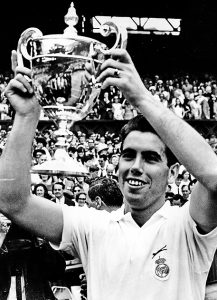 Among all the achievements of Manolo Santana in this sport, possibly the most formidable is his victory in 1966 at Wimbledon. It could also be the most important of his career. A curious fact about the tournament he played this year is that, with very little money but with a huge dose of enthusiasm, he asked Raimundo Saporta, at that time vice president of the Real Madrid soccer team, permission to use the team’s shield in his shirt. Saporta accepted, so he sewed it on his Slazenger equipment.

In 2018, with 80 years -easily said- he still goes to the gym one hour a day and continues playing tennis. We can only feel proud of him being a Slazenger Legend. However and withouth doubt, he is not only a legend in tennis, but in every aspect of his life.