It is said “never foget where you came from”. So we can’t. In many other posts we have talked about different tennis and golf legends. But today is a different day: taking in mind that Wimbledon is coming, and that we have released our brand new Tennis Sweater inspired by our legends, keep reading and you will know about Hugh Lawrence “Laurie” Doherty, the first Wimbledon Legend who won the championship five times in a row.

Destined to be a Wimbledon Legend

Born and grown in Wimbledon, Surrey, he was one of the gratest tennis player from the United Kingdom. Laurie had a huge  repertoire of drives and backhand stokes that allowed him to play easily both in the net and in the back of the court. Next to his three years older brother Reginald, they conquered ten times in a row the Doubles Wimbledon Championship. 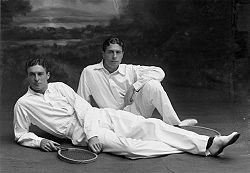 Because of his height, 1.77m, and being the younger brother, he was called Little Do. Despite of that, in 1902, the first year Slazenger was sponsoring the tournament, he reached the victory against Arthur Gore, with an expectacular final result of 6-4, 6-3, 3-6 and 6-0. The individual Wimbledon Legend was born. Apart of Wimbledon, he also won the Olympics Games in 1900 in both individual and double modalities. Furthermore, he was awared with a bronce medal in the same Olympics but in mix-double game. 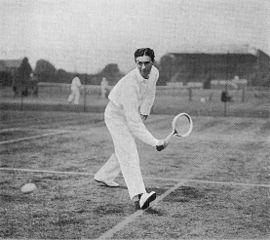 Up to the TOP

Since 1902, he kept playing both individual and double tennis tournaments, being Wimbledon and Frank Riseley his favourite championship and victim: they faced three times in four years, in 1903, 1904 and 1906, being “Little Do” the undisputed champion. He also played the final against William Larned and Normal Brookes, but non of them were a problem for our Wimbledon Legend. 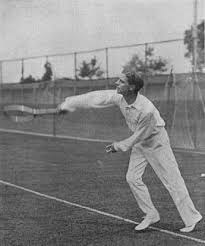 We are glad of having such a great legend in our memory. We hope you have enjoy the First Slazenger Wimbledon Legend history. Remember, in our Slazenger Heritage Shop you will find different stylish sweaters, like the Tennis Legend Number 1 Navy, . See you soon!