While most spectators in sports stands tend to opt for tracksuits and t-shirts over sharp tailoring, things are a little different at Wimbledon – especially on Centre Court, where a strict smart dress code is still in full force. We have created a little summery knitwear limited edition collection in order for you to be ready to  be spotted at the world’s most famous tennis tournament: the new Slazenger Tennis Jumper Legends Collection. As the days of strawberries, Pimm’s, and tennis whites arrive, keep in mind to update your wardrobe accordingly.

The Slazenger story is inevitably linked with tennis. Slazenger tennis balls were first requested to be used at Wimbledon by champion tennis players leading to the brand becoming the official Wimbledon tennis ball supplier in 1902. This is now acknowledged as the longest unbroken sports sponsorship in sporting history.

Legendary British player, Fred Perry, played and won Wimbledon at the All England Club in 1932 with a Slazenger racket in his hand. Manolo Orantes won the US Open at the Forest Hills Courts with his iconic Slazenger Challenge nº 1 wooden racket. And year by year, more and more stories and anecdotes from tournaments, matches, clubs and players include the brand. 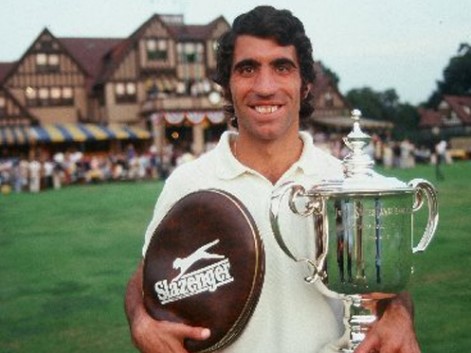 The competition has always required players to wear white, and this rule still applies at Wimbledon today. Which has led to fashion being a tournament centerpiece – both aiding athletic  performance and expressing individual personality, such as Slazenger Tennis Jumper dresscode.

By the mid-1930’s, tennis sweaters had gained intense popularity amongst players like  Fred Perry, fans and film stars like Carey Grant and Robert Taylor, who brought the court-side look to the mainstream. 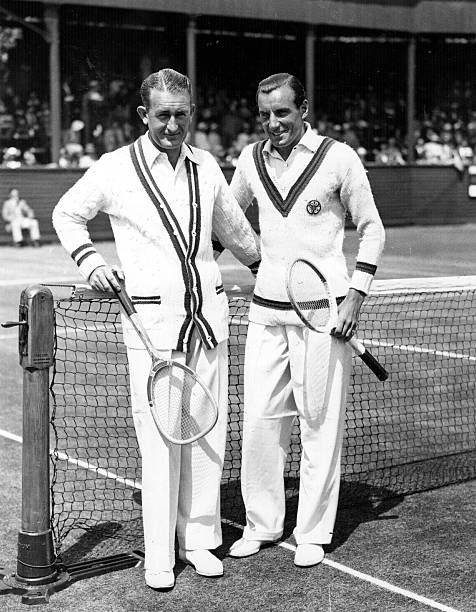 The classical tennis knitwear is normally a white or off-white cable-stitch knit pullover with a v-neck that is made of heavy cotton or wool. It features one or more colored bands along the v-neckline and optionally bands on the sleeves as well as the lower waist. This has been our main source of inspiration to come up with these three new limited edition jumpers. 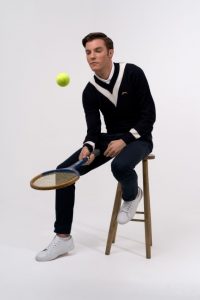 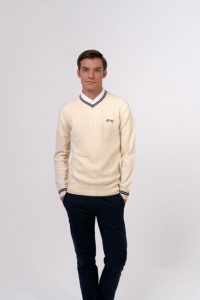 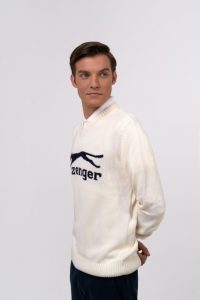 The first style of the “tennis legends” collection is the Slazenger Logo Tennis Jumper. The garment features the vintage logo from the tennis balls, carefully knitted across the chest and available in navy or white. Made from 100% cotton. The second and third styles, the V-Neck and Cable Knit Jumpers, are inspired by the impeccable style of greats such as Fred Perry and Bill Tilden.

Made from fine stretch merino wool, these are perfect for British summer evenings. Since the 1920s, Merino Wool has been worn by individuals partaking in sporting activities due to its exceptional qualities of warmth and absortion.

Hope you all enjoy this post and our brand new collection. We will keep you informed with the latest news and products. For further information, you can contact us. We will be pleased of helping you. See you in the next post.