The Wimbledon 2019 tournament is coming up. Therefore, we want to remember some of the great players who have played and have been successful in this famous tournament.  In Slazenger Heritage, we love paying tribute to the great stars of Wimbledon. As you may know, we have already talked about Roger Federer, and this time we want to talk about William Renshaw.

William began to form his place in the history of tennis in the 5th edition of Wimbledon, in 1881. Previously, he participated in a first round in 1879 and in the eighteen finals of 1880. Finally, he was crowned the following year in his third participation. With twenty years, Rensahw beat his opponent with a game renewed in speed and reaction by the standards of the time.

However, William Renshaw was not alone in the world of tennis. Renshaw always went hand in hand with his twin Ernest throughout his career as a tennis player. Together they won in seven doubles contests at the All England Tennis Club. Both were pioneers in competing outside their country making winter tours of French lands. 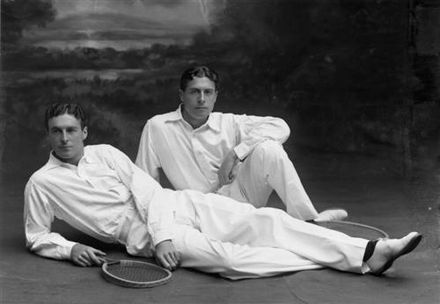 Over the years, Renshaw’s tennis lacked a rival over the English field. It is said that the game of serve and volley, which was institutionalized many decades later, was born from the hand of Renshaw, when they nicknamed his way of looking for approaches to the net as the ‘Renshaw Rush’.

Taking advantage of the rule that allowed the defending champion to wait in the final without contesting any previous round, Renshaw won 5 of the 6 titles playing only the last step.

The triumphs and Renshaw’s tennis career is very inspiring. If you want to feel like one of the great tennis players of the past, you can start by visiting one of our jumpers from the collection of tennis legends.

We hope you have enjoyed with the William Renshaw´s history. We will come back soon with the history of other legend players of Wimbledon.

Do not hesitate to contact us if you have any doubt.